Shares of French luxury goods makers, including LVMH and Hermes, dropped in European trading on Tuesday after President Donald Trump’s administration said it may place heavy tariffs on several goods.

LVMH – which includes the brands Louis Vuitton and Hennessy – and Hermes each fell more than 2% following the announcement. 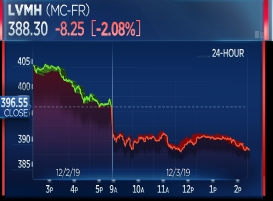 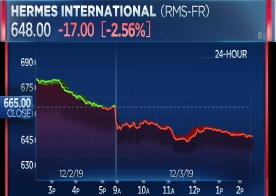 The move by the U.S. comes in retaliation to France’s implementation of a Digital Services Tax. Under the new tariffs, which may begin in late January, the U.S. Trade Representative could add levies up to 100% on around $2.4 billion imports from France.

“This would essentially double taxes on French companies and citizens with U.S. income,”…

Your first trade for Tuesday, December 3

While tax rates are still relatively low, consider this move for your company stock options

Mnuchin says economic impact will be clearer within weeks

Flight delayed? This firm wants to get you paid

Can stocks keep soaring as the U.S. dollar surges? What investors need to know